Your First & Last Stop For All Things Wildwood!

Get Your Wildwood Souvenirs Here!

We carry a HUGE variety of high-quality gifts, clothing, shore decor and more! 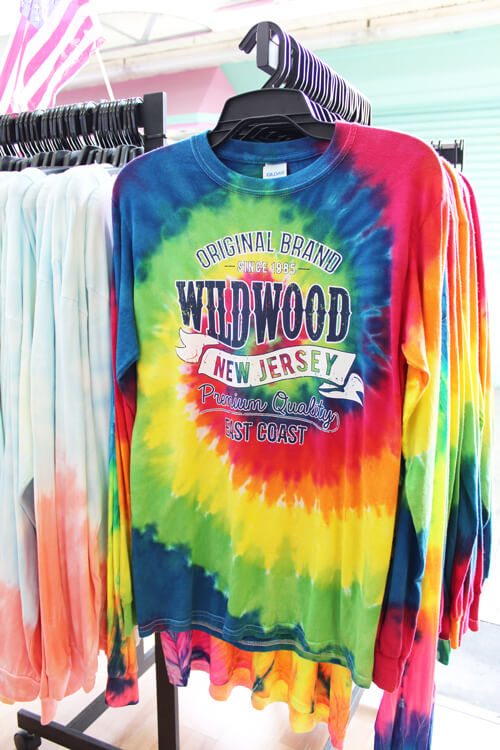 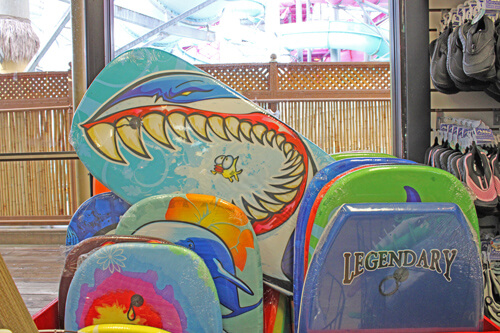 Lost a flip-flop? Broken beach chair? Out of sun screen? We’ve got you covered!

My friend Michelle Rutkowski, retail queen of the Wildwoods Boardwalk, had a problem this summer. She has the two of the niftiest variety stores on the Boards, and this season sales weren't exactly going through the roof, even though she was doing okay.
Trouble was, she'd promised her mom, Kathy, and her 7-year-old daughter, Sylvia, a trip to Japan this summer to visit her brother, Mitchell, who is in a Ph.D. research program in physics there, and the bucks just weren't there for the trip as the summer progressed.
Then came a brainstorm.
Michelle chalks up the answer to the Man Upstairs. "I'm a good person," she said last week during a lull in her North Wildwood store. "I try to help people. And as I was laying in bed thinking about how I was going to do it, the answer came to me."
The answer was the World Cup soccer tournament, which was the biggest thing in sports this summer, and the unending, nerve-wracking, deafening cacophony of the vuvuzelas, the African horns, that were so loud and persistent throughout the games that the TV networks had to install bigger and better noise filters so that their announcers could be heard over the din.
"Vuvuzela" is a South African term for "stadium horn," but Michelle's brainstorm was to make it a Boardwalk horn. And, as fortune and/or the Man Upstairs would have it, one of Wildwood's beach soccer weekends was coming up and the town and the Boardwalk would be filled with young soccer freaks and their purse-string parents. Yummy. A made-to-order market.

It took Michelle exactly one phone call to hook up a supply of red, green, or blue plastic vuvuzelas that she could retail for the fast-mover price of five bucks. She says that she is very loyal to her suppliers and doesn't try to work them over for an extra 25 cents every time she gets a chance, and they appreciate this civilized buying behavior and reciprocate her loyalty. Michelle is about as big as a minute, with a rat-tat-tat voice that sounds like a cross between Bette Davis and Marlene Dietrich, and she is as good a business person as anybody on the Wildwood Boardwalk.

Anyhow, the supplier she called was fresh out of vuvuzelas, but steered her to some people who were literally making the horns in their garage, a batch at a time. She hooked up with them and the vuvuzela pipeline opened.

Now having the noisy horns is one thing, but selling them is a horn of a different color. So Michelle took the bull by the horns - literally --- and stationed herself outside on the Boardwalk, and, like Lauren Bacall told Bogie in "Key Largo," "Just pucker up your lips and blow."

So blow she did, and blow also did most of the kids working for her - mainly Eastern Europeans that she employs by the score - and soon the sea air was fill with the noisome prolonged "WAHHH! WAHHH!" quack of the vuvuzelas. And soon it got even noisier on the Boardwalk as the horns began to fly out of her stores like the proverbial hotcakes (horncakes?) Half the soccer kids in town were honking away like mad geese.

"People were coming in and buying three, four, five, at a time," she said. "And after that first day, one of the guys showed up for work with big bruises all around his mouth. I said, 'What happened to you? Did you get in a fight?' He looked at me and said, 'I gave 100 percent for you.' He blew so long and hard on the horn out on the Boardwalk that he got all those bruises. Jeez!"

Other Boardwalk vendors were late getting any of the horns -- if at all -- and they ended up having to charge eight bucks a copy, so Michelle had the price market to herself. "They probably think I'm a genius," she said, trying hard not to gloat.

When the smoke cleared, she had moved 4,000 vuvuzelas and her mom and daughter had their Tokyo trip.

And guess what? The icing on the cake was another soccer weekend and even more horn sales. Michelle was a little sheepish when I mentioned noise pollution, but in her heart I have the feeling that she was thinking, "Viva Vuvuzela!"

Fast forward to 2021: Sylvia is a freshman at UCLA 💓
And Michelle has 4 stores on the boardwalk now... Elbys at 25th, Boardwalk’s Best at Glenwood, Five Mile Marketplace at Schellenger and her outlet on Cedar ... See MoreSee Less

You have the best stores on the boardwalk! We only shop there or the Morey’s Store every year.

Happy August! 18 days until the biggest country party on the beach! Grab your hat and your boots and come down to the shore for
Barefoot Country Music Fest August 19-22, 2021. ... See MoreSee Less

Our friendly staff are the best in the business! Choose from hundreds of design and shirt combinations, custom-made while you shop!

Need shirts for your team or special event? Give us a call and join the ranks of our happy customers! 609-770-7545 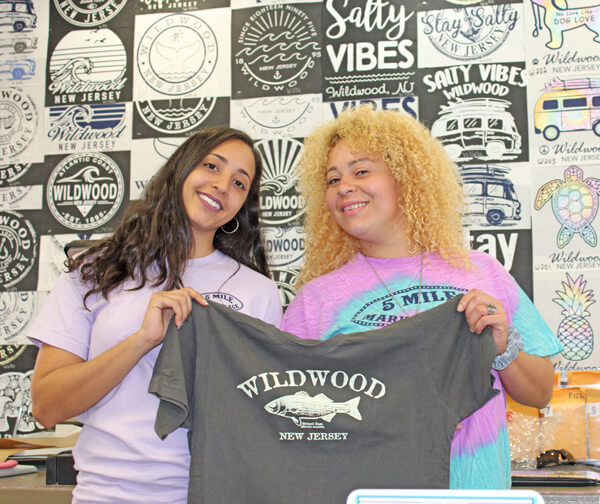 Visit Our Family Of Stores! 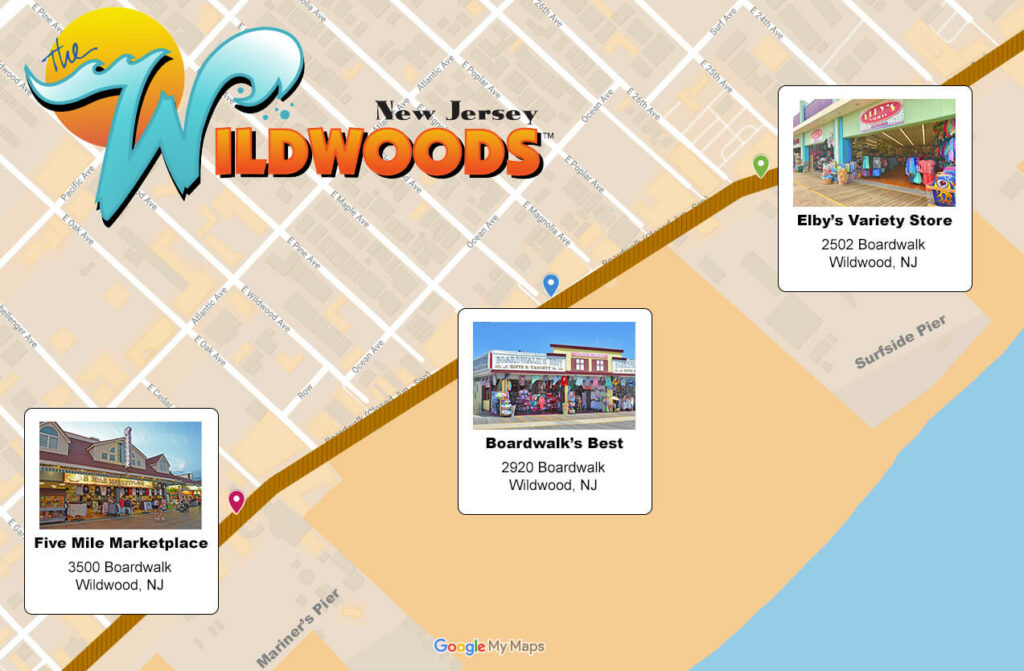 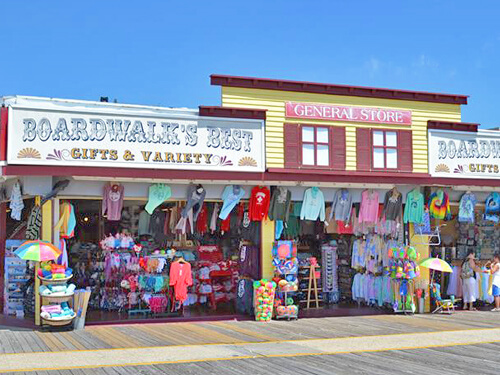 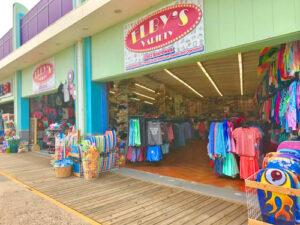